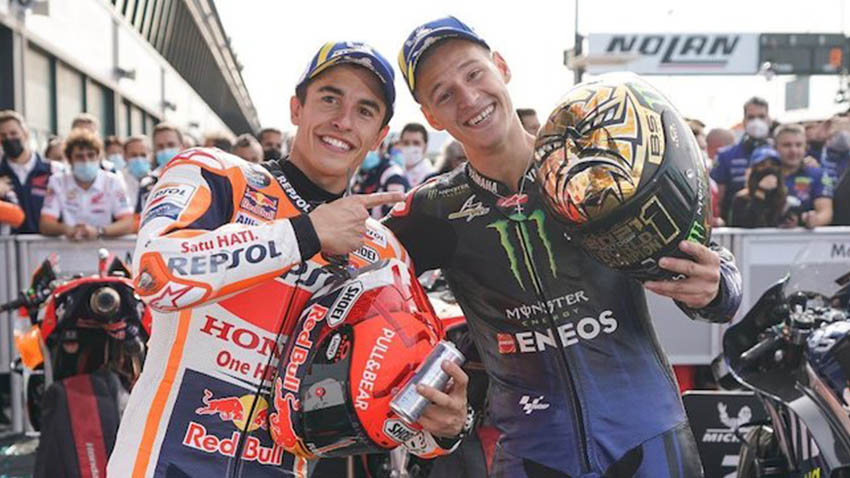 MDP Live - Monster Energy Yamaha racer, Fabio Quartararo, has missed a duel with Marc Marquez like they did in MotoGP 2019. The reason is, they didn't get a chance in 2020 because Marquez was plagued by injuries. In 2021, Marquez returns to racing, but never wheel-to-wheel with El Diablo.

Quartararo and Marquez were expected to form a new rivalry when they had a fierce duel until the last lap at the San Marino and Thailand MotoGP in 2019. Unfortunately, this rivalry did not continue in 2020 because Marquez missed a full season due to a fractured right hand bone after the Jerez accident.

In 2021, Marquez was inconsistent because his physical condition had not recovered. However, he had won in Germany, Austria, and Emilia Romagna, and even had a fierce duel with Pecco Bagnaia in Aragon. Unfortunately, Marquez's positive performance trend was again hampered by an injury to his right eye diplopia after falling during off-road practice.

Marc Marquez is a role model for the last 10 years

"Marc didn't race for eight months due to a serious injury, understandably this condition initially affected him. But he still won three victories. Unfortunately, when he really returned to his former level, with full strength, he got injured again," said Quartararo via Solomoto, as quoted by Motosan, Thursday (6/1/2022).

Quartararo also stated that Marquez has a very important role in MotoGP competition, considering that he has a very high level and indirectly raises the performance standards of his rivals. For this reason, according to Quartararo, Marquez has been the main reference for the riders for the last ten seasons.

"For me, Marc is a role model to follow over the last ten years. He became a star not only because he is a great racer, but also because he is an idol for this sport in general. I really want to get back to fighting with him again," continued the 22-year-old racer. this.

For him, Acosta is one of the young drivers with a strong mentality and way of riding, so it would not be a surprise to be able to be directly competitive in MotoGP. "Pedro our future. Winning Moto3 in the first year was very difficult. I remember, since Jerez, people have burdened him," he said.

"For a young rider like him, these kinds of pressures can be difficult to handle. However, Pedro knows how to control him, because mentally he is very strong, especially the way he rides. In two years, or sooner, he will be able to immediately fight for the world title in MotoGP. He will come soon," concluded Quartararo.