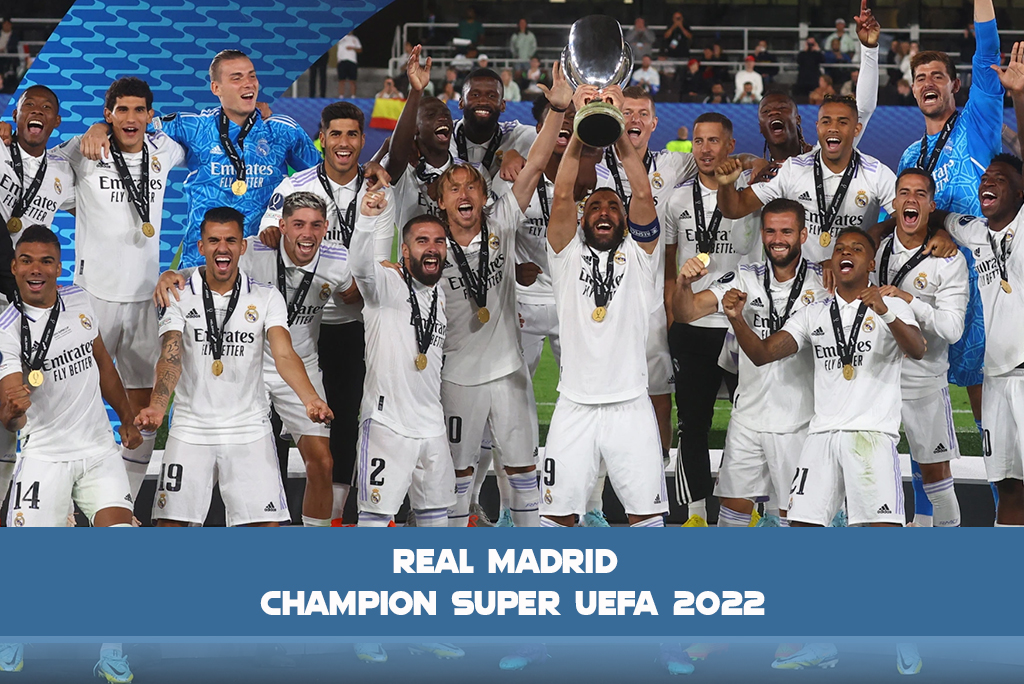 The match in 2022 Eropa Super Cup ended with Real Madrid as the winner with a score of 2-0. This match took place at the Helsinki Olympic Stadium, and the game looked very exciting, Frankfurt looked very wild and looked dangerous.
But Madrid's defense and attack have strong accuracy. Several saves were made by Thibaut Curtois, and the attack was carried out by another teammate.

The first goal came in the 37th minute by David Alaba providing a header and the second goal in the 65th minute through a hard shot from Karim Benzema. Throughout the game Frankfurt always gave his best trying to turn things around.

But Frankfurt had to swallow the bitter pill to accept the defeat of Madrid's core players who played very well with good performance, no wonder it was Madrid who came out victorious.

Thibaut Courtois The goalkeeper of the Real Madrid team is a savior by showing extraordinary skills. made a save from the Frankfurt attack keeping the goal from conceding.

On the other hand, Team Madrid defender Dani Carvajal's attacking and defensive abilities came forward to provide resistance and trouble Frankfurt, Eder Militao was able to control himself so that Frankfurt could not penetrate the defense. David Alaba with a good game pays attention to timing and movement. Meanwhile, Ferkand Mendy.

And Midfielder is a very scary part for Frankfurt, Casemiro plays great and often beats Frankfurt with hard tackles, Toni Kroos passes the ball well to his team. Luka Modric found it difficult in this match.

And the Fade Vaverde Attack Team showed a good performance entering the opponent's territory giving attacks to outwit the opponent. Vinicius Junior was the best striker in this match providing the performance and contributing to the scoring.
Karim Benzema got a shot right on target and contributed to the next goal but also missed several chances.