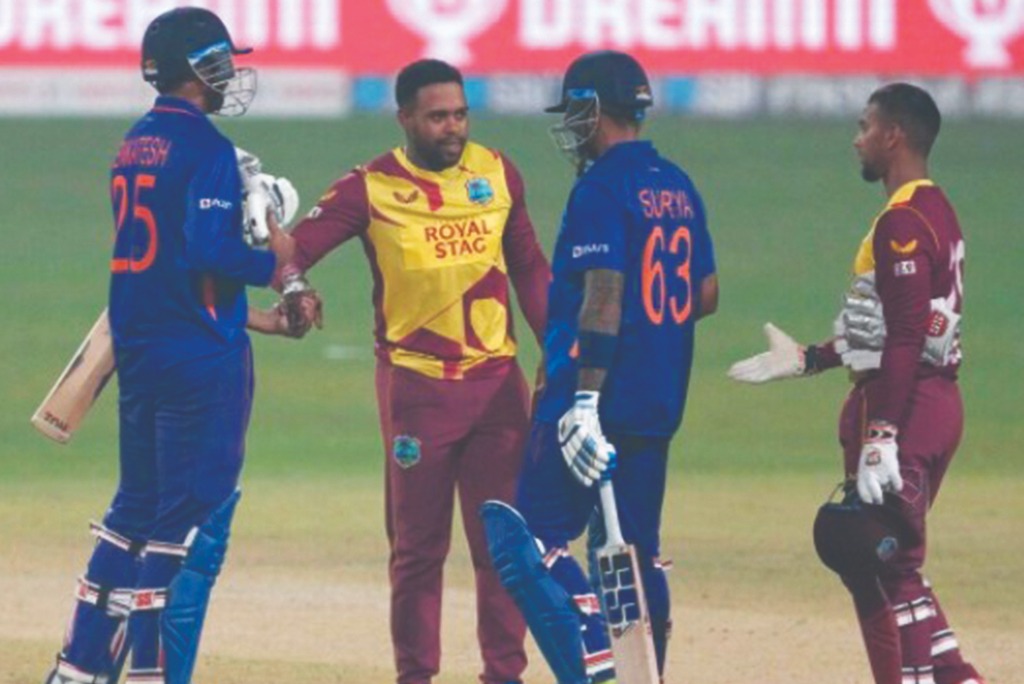 More than this West Indies team, India would be concerned about Deepak Chahar’s injury, as the swing bowler looked to be in serious pain, after trying to stop a ferocious Kieron Pollard pull off Bhuvneshwar Kumar’s bowling. Chahar left the field immediately. The injury didn’t look good.

As for the West Indies’ resistance, it was basically down to Nicholas Pooran’s half-century that gave their total a fighting feel. On a very good Eden Gardens pitch, a victory target of 158 wasn’t going to bother the hosts much. Rohit Sharma made a crunching start, which offset Ishan Kishan’s struggles at the other end. Thanks to the skipper, India raced to 58 for no loss at the end of the Powerplay and after that it was about carrying on with the momentum. The hosts duly sealed a six-wicket victory in the penultimate victory.

At his happy hunting ground, Rohit was bossing the Caribbean bowling. A couple of fours and as many sixes in an Odean Smith over oozed languid elegance. But after scoring 40 off 19 balls when he became Roston Chase’s maiden T20I victim, India’s progress became a little laboured. Virat Kohli was serenaded by ‘Kohli, Kohli’ chants by a handful of fans, as he walked out to bat. He responded to it by dancing down the track and playing a gorgeous lofted drive off Akeal Hosein. Another attempt to clear the long-off boundary off Fabien Allen, however, wasn’t fruitful and once again the former captain got out cheaply after making a promising start.

His departure on the back of Kishan’s dismissal brought the tourists back into the game a bit. Rishabh Pant, too, got out soon and at 114/4 in the 15th over, the hosts had a bit of concern. From the West Indies’ perspective, Suryakumar Yadav’s wicket became important at that stage. But the latter was waltzing through his knock, offering an assortment of conventional shots and innovations. His 34 not out off 18 balls slammed the door shut on the visitors. Venkatesh Iyer at No. 6 gave him good company, scoring 24 not out off 13 balls. An unbroken 48-run fifth-wicket partnership took India home with seven balls to spare.